The most common allegations in anesthesia claims 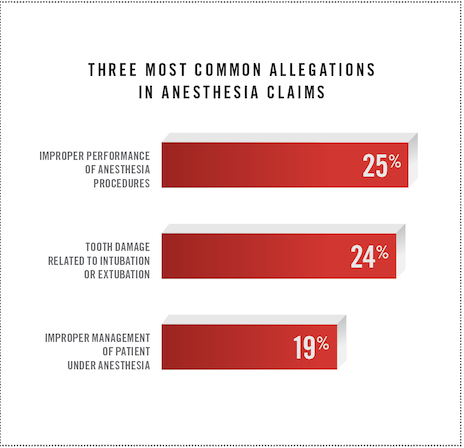 A PDF version of this document is available here.

Although the safety of anesthesia care has significantly improved over the years, we found that patients still suffer injuries related to administration of anesthesia. The severity of injuries ranged from minor to severe—from chipped teeth to paralysis, brain damage, and death.

Technical performance (44 percent) was identified as the most frequent cause of patient injury. This statistic is misleading, however, because three-fourths of these cases involved complications that the patient knew were risks of the procedure prior to surgery. These complications were not necessarily due to negligence. However, the other 25 percent of injuries were due to poor technique, incorrect body positioning, or inappropriate method of administering a drug/anesthetic.

Inadequate patient assessment (15 percent) was the next most common factor that contributed to patient injury. This included inadequate history and physical for patients with conditions that increased the risk of complications and unanticipated outcomes. It also included failing to note available clinical information, such as abnormal EKGs, elevated potassium, and pulmonary artery stenosis, that resulted in patient injury.

The third most common problem associated with patient injury waslack of documentation (14 percent. Documentation was missing for clinical findings such as low blood pressure and oxygen saturation. Experts also noted inadequate documentation of care in situations such as resuscitation attempts.

There are several possible explanations for gaps in documentation: anesthesia professionals were not monitoring patient vital signs, were distracted, or failed to note what they were observing. Gaps in documentation imply inadequate vigilance, thus sometimes making these cases difficult to defend.

Failures in documentation may contribute to the fourth most common factor,inadequate patient monitoring (12 percent). This was seen in cases where there were drops in vital signs or end-tidal CO2 values with no response from the anesthesiologist for an unreasonable amount of time. There were also delays in response to clinical alarms, which were either disregarded, turned off, or not heard.

The fifth most common factor that contributed to patient injury waspatient factors (10 percent. Most of these factors were related to the patient anatomy, causing difficult or delayed intubations and difficulty placing regional anesthetics. Other patient factors were comorbidities, such as obesity, cardiovascular disease, diabetes, chronic pulmonary disease, smoking, hypertension, and sleep apnea.

A common theme in this study was inadequate preparation for complications. For example, the appropriate equipment was missing when patient anatomy made it difficult to intubate and delays caused an anoxic event. In a few of these cases, rescue was delayed because equipment for emergency tracheostomies or cricothyrotomies was not readily available. Responses were delayed when blood and blood products had not been ordered for patients with clotting disorders or impaired clotting mechanisms due to medication.

Extubation resulted in harm if too much medication was given in close proximity to the time of extubation. Some of these patients suffered anoxic brain damage when they slipped into a coma due to sleep apnea, overdose of opioids, or drug reactions.

There were also problems with loss of the airway if extubations were performed too soon after surgery. Some patients had anatomic structures, such as thick necks, that had made the initial intubation difficult. Reintubation was even more challenging in a crisis or in patients who had swelling or bleeding around the airway.

The results of this study reveal risks to patients and exposures for anesthesiologists and CRNAs. The goal of this study is to alert anesthesia professionals to risks that can be addressed to help prevent patient harm.

By David B. Troxel, MD, Medical Director, Board of Governors

The guidelines suggested here are not rules, do not constitute legal advice, and do not ensure a successful outcome. The ultimate decision regarding the appropriateness of any treatment must be made by each healthcare provider in light of all circumstances prevailing in the individual situation and in accordance with the laws of the jurisdiction in which the care is rendered.